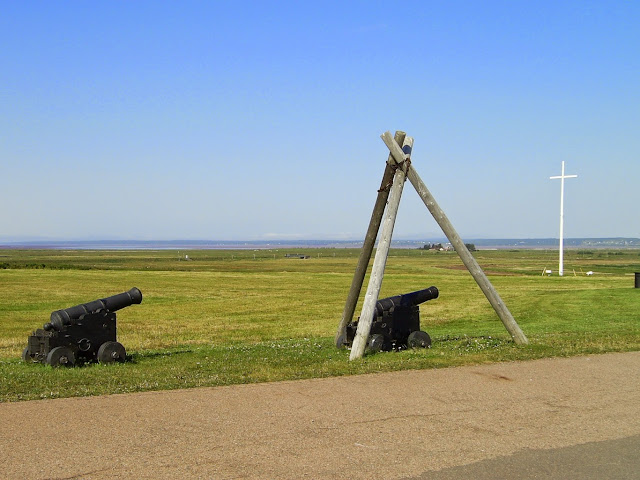 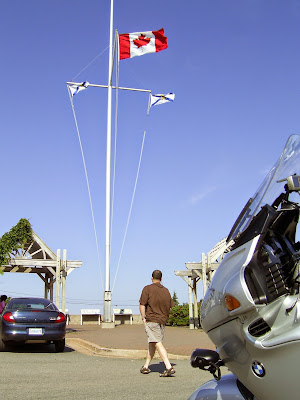 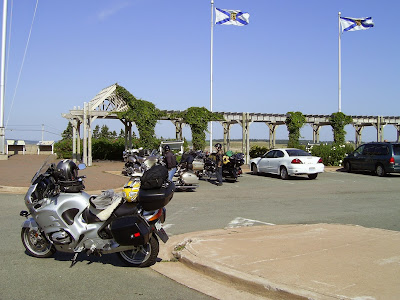 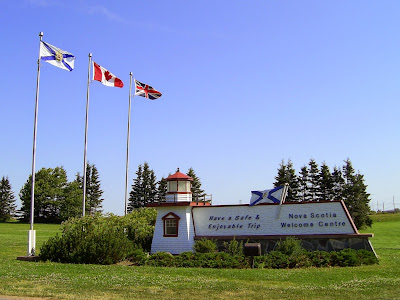 I followed the Fundy Bay Ecotour drive along the Bay of Fundy again. After getting lost, I got help from a helpful driver in finding the directions to Joggins village. There is a good outlook of the Fundy village from a beach near this village, famous for 'beach combing'. People comb the beaches here in search of shells from pre-historic era. 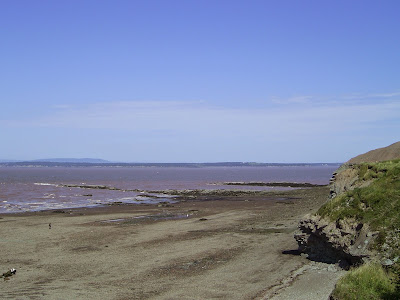 At Joggins village is a plaque dedicated to Canada's fallen soldiers in the world wars. I continued the journey south to Cape Chignecto. Though driving along the Bay, except for a couple of places including Sand Rivers, where the river entered the bay, the dense forest cover besides the road meant I had fewer views of the Bay waters. But things changed once I reached Cape Chignecto Provincial Park. This place offered excellent views of the surrounding landscapes particularly the cliffs and the waters below them. This park is a wholly community managed park. It was recently established and many of the trails are yet to be fully developed being very remote. But they are said to offer very good views of the surroundings. 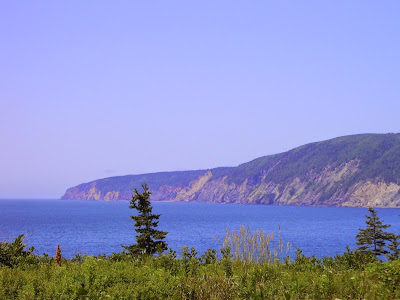 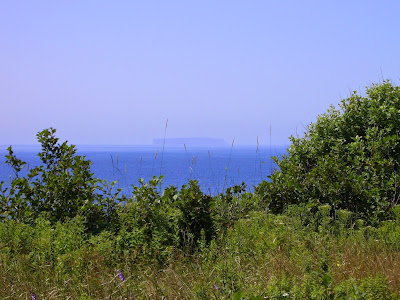 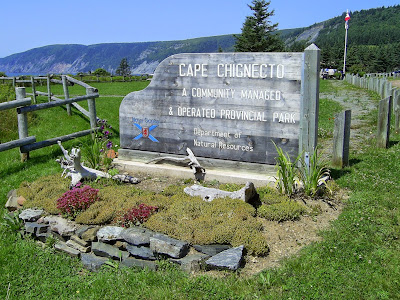 Continuing for a couple of kilometres, I reached Advocate Harbour. I parked my car at this small fishing harbour and took pictures of the low tide at noon.The high tide was at 2:40 PM, according to the tide's timetable. I finished my breakfast and departed to Cape D Ór located beyond the cliffs along the bay. A couple of km along the state highway/ route took me to the deviation that led to the place. For the next 10 km the rough, untarred road wound up hill through dense forests. There was some construction going on to build the roads. But this meant, the area which until now was visited only by adventure oriented tourists, would see more visitors. I spotted some white-tailed deer with their young ones enroute. As I neared the place, the canopy cleared revealing a spectacular combination of dense forests cut abruptly by the steep cliffs that suddenly dropped into the crystal blue waters of  Fundy Bay below. I parked the car in the untarred parking lot and decided to walk the 500 metre trail down the cliff to the light house of Cape D Ór.

The walk along the metalled trail was not very tiring but the scenery was simply spectacular. The beautiful flowers of different colours made a perfect setting to the blue waters, the cliffs above and the forests over them, to make some very picturesque pictures. 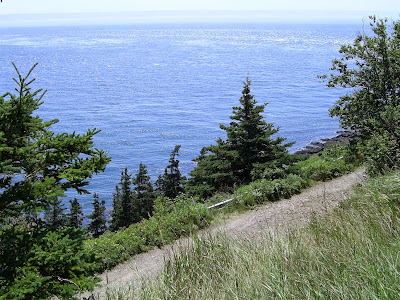 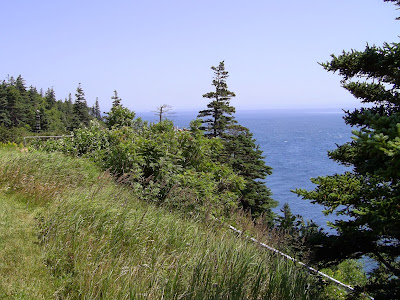 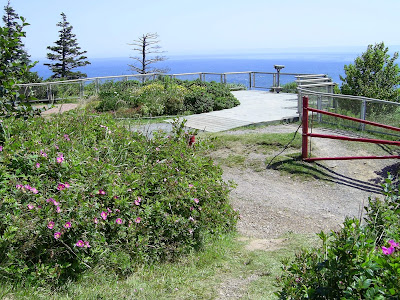 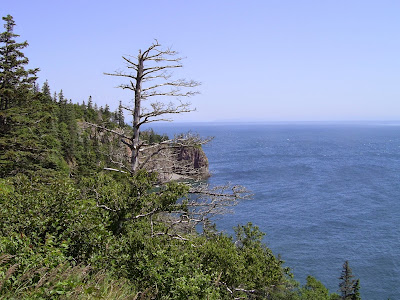 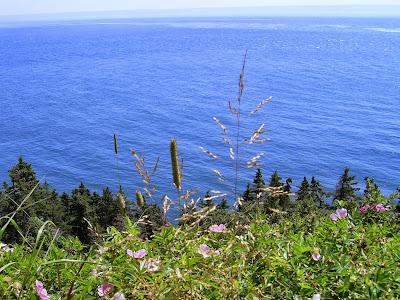 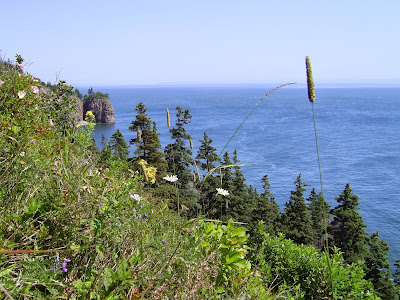 The light house overlooked vast expanses of the Fundy Bay, the water clean blue, the sun bright and the air pure and clear, neither warm nor cold. I could not have asked for anything more, driving all the way from Toronto. There is a small private restaurant near the light house, it looked like the house of the former light house keeper that may have been converted into a hotel. 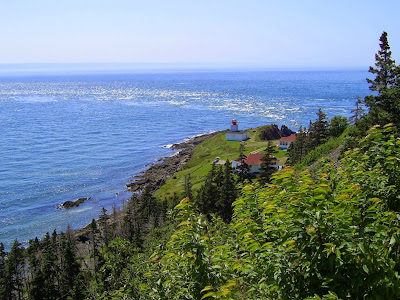 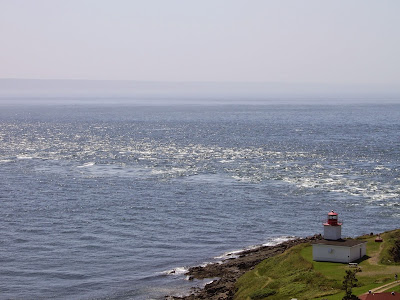 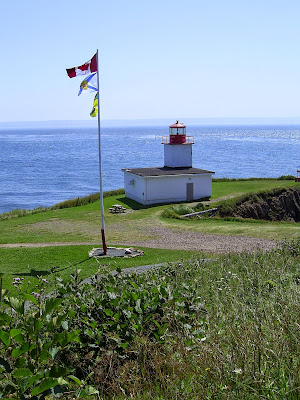 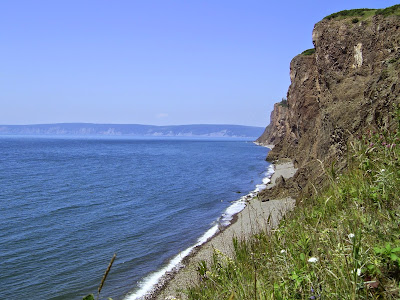 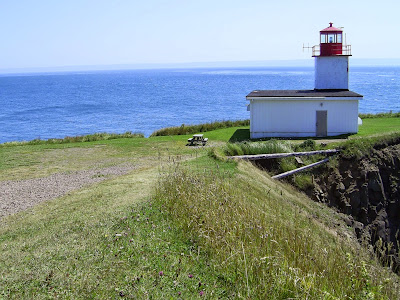 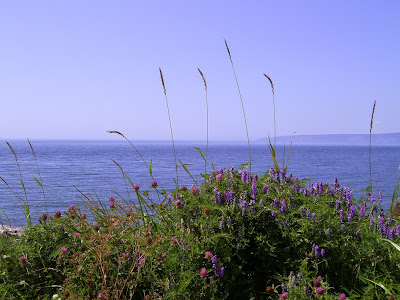 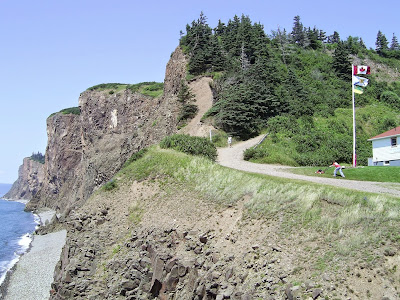 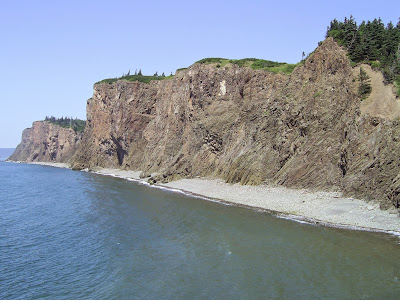 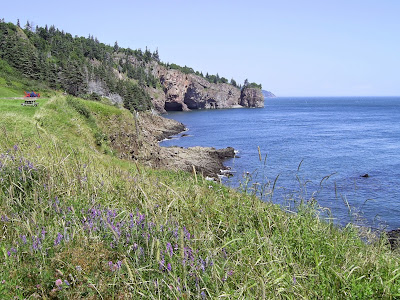 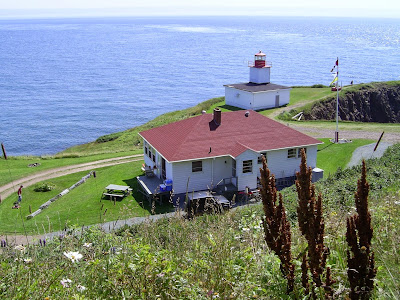 I walked back the same path, admiring and taking more pictures along. Driving back was fun, though on occasions I was worried about the less treads on my front tyres not being able to gather enough friction to hold back the car through the steep drive down this dirt track. 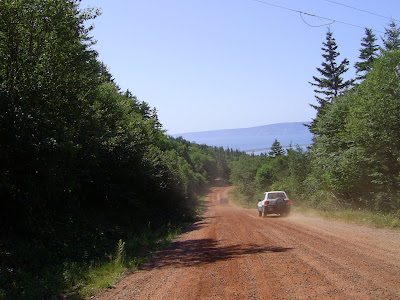 Click here for the next story in this series
---

For more information about a destination, have a tourist destination or your property listed on this page or to buy an image please email the author at tumkurameen@gmail.com
Advocate Harbor Atlantic Ocean Bay of Fundy Cape Chignecto Cape D Ór East Canada Fundy Bay Joggins Maritimes North Atlantic Nova Scotia