The drive to Bay of Fundy from Saint John City 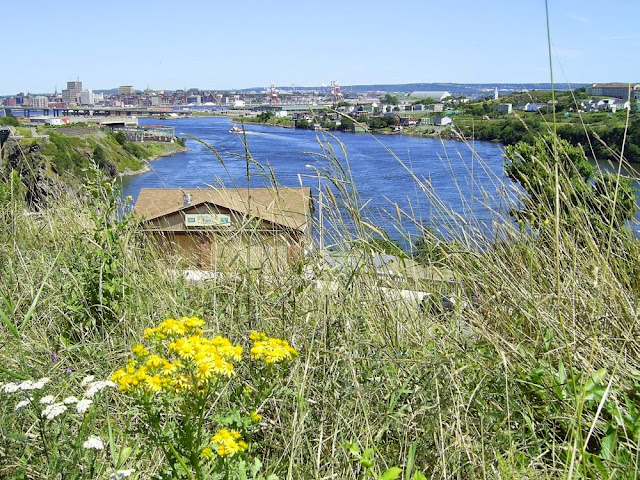 Day 4
I started to drive again at midnight towards St.John City. I took Highway 7. Just as I left Fredericton at the entrance of Hwy 7 were numerous signboards warning drivers of moose. I was excited. I drove at less speed than was indicated on the Highway. The highway was very isolated. Throughout the 1 1/2 hour drive to Saint John, had only a handful of vehicles overtaking me and I had only a handful of vehicles passing by towards Fredericton. This was one of the best drives I had done in my life. The wide highway cutting through dense forest, an occasional whitetailed deer peeping at the edge of the forests to determine if it was safe for them to cross the road followed by their young ones, the clear sky well lit by the numerous stars with hardly any air pollution and no vehicles for miles and miles. I will cherish these moments for a long time to come.

I entered Saint John very early in the morning and camped at Holiday Inn. For me Hwy 7 was an alternative to Hwy 2 which travels along St. John river. But the road network in Canada is so advanced, it hardly makes any difference in travel time even if you take an alternate road to reach the same place, provided both the routes have the same amount of traffic. The comfort of Holiday Inn was too hard to resist for my body. I woke up just past noon, checked my emails, loaded the rechargeable batteries of my digital camera and started for Fundy Bay.

Along the way I stopped at the scenic outlook near 'Reversing Falls', which provides scenic views of the city. 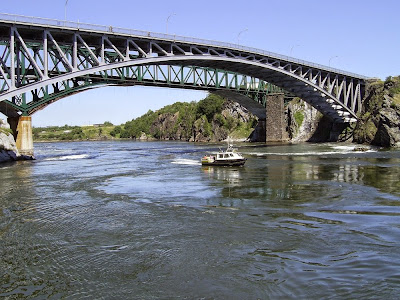 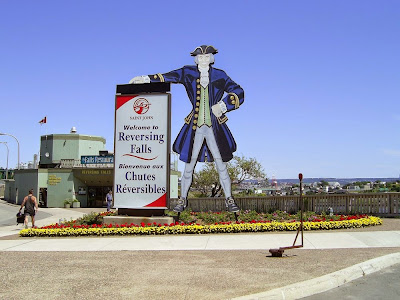 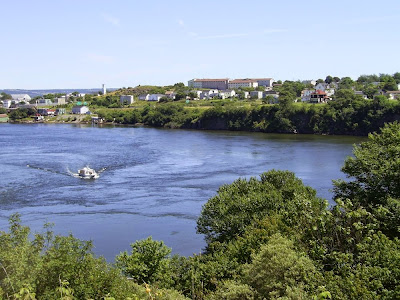 Driving towards Fundy Bay, as usual the roads were wide and well constructed and the forests were dense for this was New Brunswick. From Highway 1  I followed the exit to Fundy National Park towards Fundy Bay on Route 114. This road to Fundy Bay was a single two way road and there was heavy traffic on it thanks to the tourist season. After entering the park by purchasing a day permit, I stopped by the visitor information centre. The centre was manned by well informed and helpful volunteers. There is a beautiful, small lake just besides the information centre. 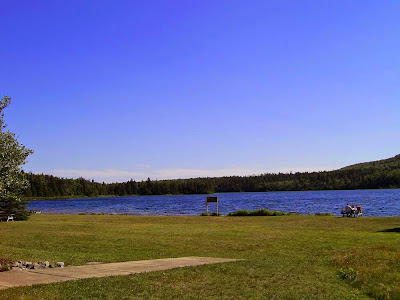 I didn't have much time to hike in the park, though I read there were some beautiful trails and waterfalls in the park. But I did stop along the way to watch the beautiful waters of Fundy Bay. The scenic outlook besides the road leading to Alma village offered some very good opportunities to take pictures, as the road winds down the Appalachian foothills to the Fundy Bay. I stopped by the information centre. The views around the centre of the Fundy waters are panoramic and beautiful. The area has a well maintained lawn where families stop by to barbecue and picnic. 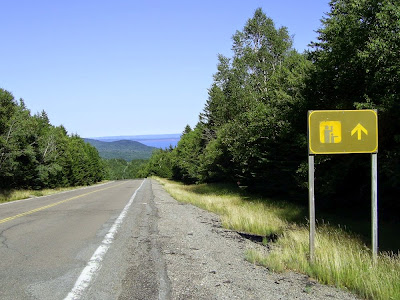 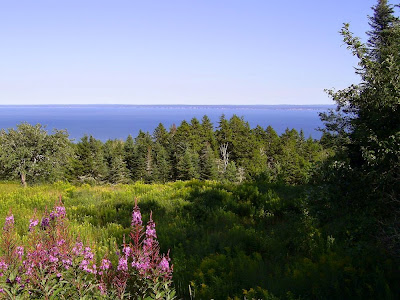 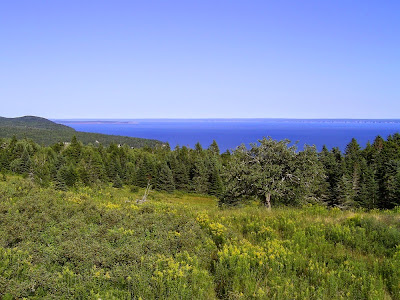 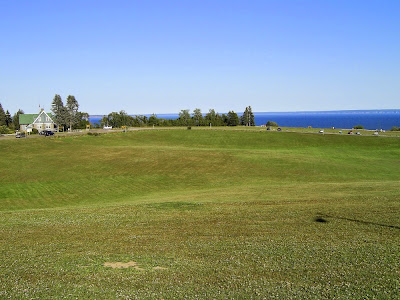 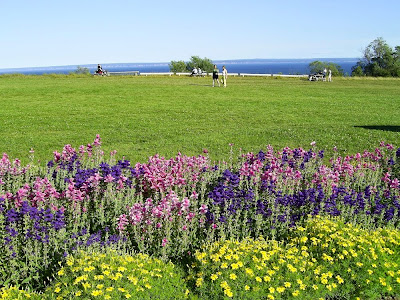 Just outside the park boundary is the Alma village. Set against the back drop of dense forests of Fundy Park on one side with rivers flowing down to join the Fundy Bay and the Fundy bay waters themselves on the other side, this a very interesting and a truly beautiful place. The village has specific sites where one can stop and view the waters of Fundy Bay rise and fall with the tides. There are boards at these places which educate visitors with the phenomenon of tides with specific reference to Fundy. The village also sells fresh fish and lobsters caught from the sea. 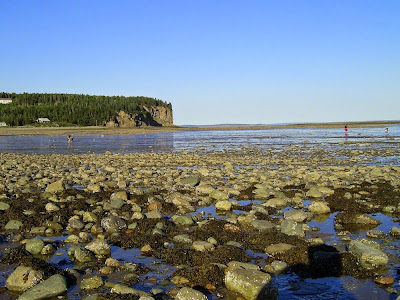 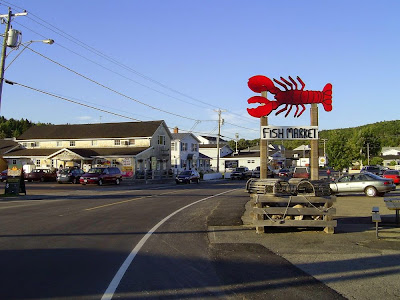 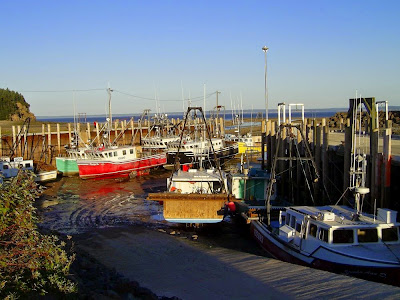 The drive from the village along the scenic 915 route of Fundy Bay is worth trying. The road plays hide and seek with forested but not so steep valleys, thinly populated hamlets and the views from Fundy Bay. Along this route lies the beautiful Cape Enrage light house, which is supposed to be among the most beautiful sights in Canada. 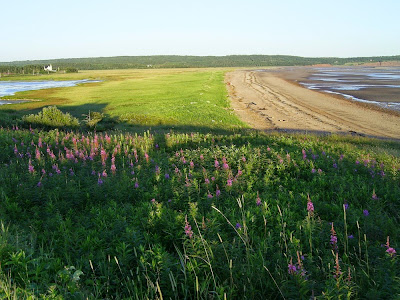 As it was quite late in the evening, I had to skip this sight and drive ahead to Cape Rocks in the The Rocks Conservation Area, where the rock formations due to tides are very famous. The sun had already set when I reached the place. I took a couple of pictures of the skies with the sun set and crescent moon. 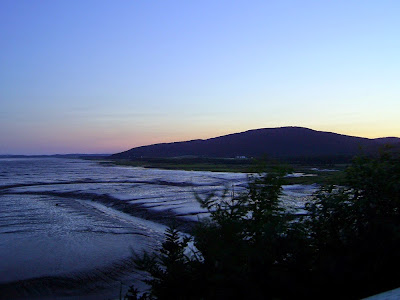 I continued the drive after the sunset and halted overnight in Moncton city.

For more information about a destination, have a tourist destination or your property listed on this page or to buy an image please email the author at tumkurameen@gmail.com
Bay of Fundy Canada East Canada Fundy Bay Hopewell Cape Maritimes North Atlantic Tide rise