The 1000+ mile drive from Canada's Atlantic Coast to Toronto 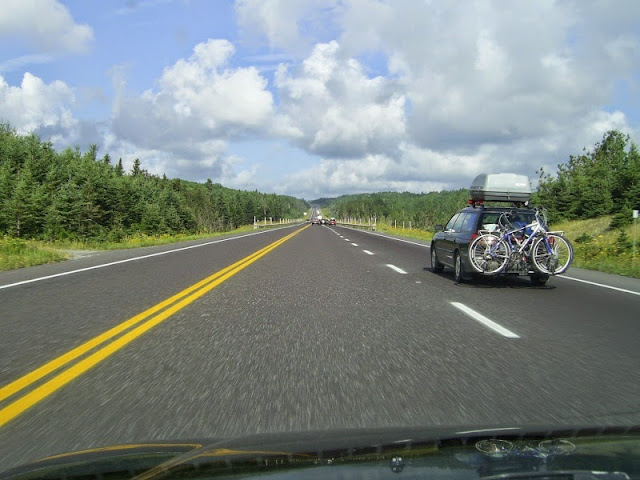 I started off for my home in Toronto from Canso Causeway in Cape Breton Island of Nova Scotia province. On this road just before exit 30 between James River and Beaver Meadow Road, I could sight a bald eagle scavenging on an animal that was run over. It was about 6:35 PM Atlantic time. 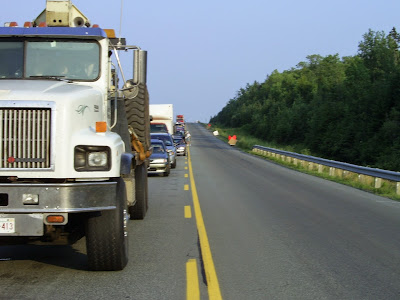 Although my original plan was to drive along the Sunrise Trail on Highway 6, I missed the directions and instead drove to Amherst, beyond Truro. For the entire trip over the past few days since I left Toronto I was the sole driver and navigator. On most occasions I had to look at the map for directions as I drove. This made me miss my direction this time around. It didn't matter much as the Trans-Canada Highway 104 was very good and allowed me to drive at high speeds sometimes touching 150 kmph.

After driving up to Moncton on the Hwy 2, Trans-Canada Highway, didn't want to drive to Fredericton again as I had already seen it earlier during this trip. I took Route 126 which leads to Miramachi. During the entire trip the sun was bright and since I didn't have my windows tinted, my skin got tanned, particularly the parts exposed to sun. And the heat meant it had to rain. As I approached Miramachi on this less traversed road, it began to rain heavily. Keen not to test my front tires which were reaching their end, I drove below well below the maximum allowed speed. After reaching Miramachi, I filled gas and shopped bread and milk to eat for the next morning. When I enquired a few fellow shoppers on which was the shortest route to reach Riviere du loup, I was unanimously advised to drive up to Hwy 8 to Bathurst and then to Campbelton. Then I enquired about the less traversed Route 108, each person gave me a different reason on why not to travel on that route. The reasons ranging from the road being isolated, full of moose, no help if required and the absence of street lights - all of which inspired me to actually drive on it!

According to the map, in the route that had chosen to drive take the 137 km drive from Renous to Plaster Rock had no human settlements. The sun was fast going down as I drove along the rain decreased and finally stopped, as I entered Route 108 near Quarryville.

The occasional homesteads and farms began to fade giving way to dense forests on both sides. I drove steadily but below the maximum speed enjoying the serenity. About 30 minutes into this drive, I suddenly came across a long red fox just at the edge of the road. Stunned for a moment by my car headlight, it later composed itself. The silence I maintained helped me further observe it. To my pleasure out of the bushes came another of its kind, which looked like its mate, to play with it. The occasionally fog covered road, the isolated road, the adjoining dense forests and these rare animals playing fearlessly ahead, this was a road worth driving. I continued on the isolated road for a couple of hours more and during this entire evening drive I came across just about 7 vehicles on this road. Tired, I pulled the car off the road and slept inside it near the town of Plaster Rock.

Day 8
Early next morning, I drove up to Grand Falls via New Denmark town again. I drove along the US border of Maine state on the trans-Canada Highway 2. 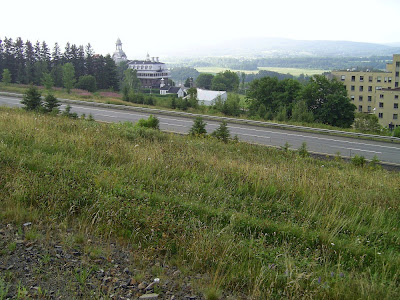 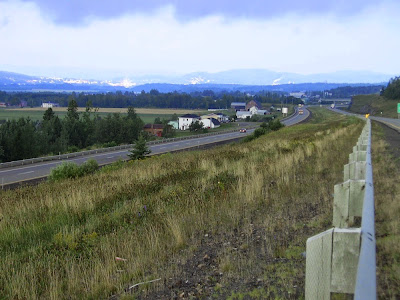 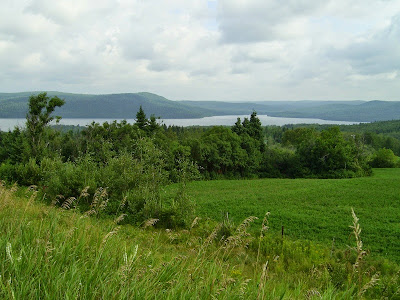 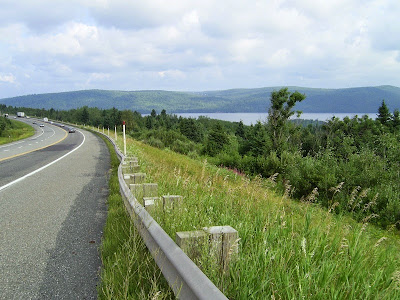 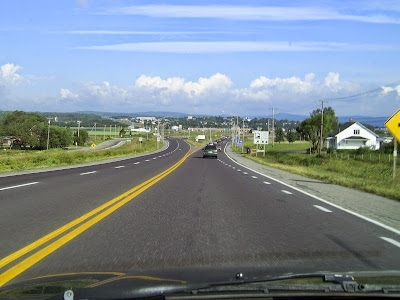 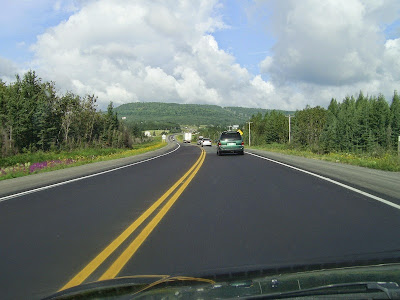 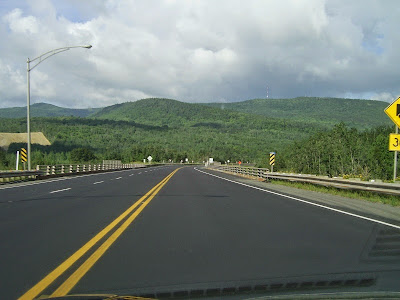 Crossing Edmunston, I reached Riviere-du-loup again. I drove in the city for a few minutes and visited the same Tim Hortons coffee shop that I had been here a week ago during my drive towards the east coast.

Riviere-du-loup is a beautiful little city. Stopping at a park that overlooks the city I had a look at the beautiful white buildings of the city and the vast St. Lawrence river to the west and the beautiful mountains of Saguenay Park behind. Whales occasionally enter this river from the Gulf of St. Lawrence. I continued my journey along the picturesque Route 132 enjoying the beautiful scenery around and stopped by a road side view point to have my breakfast. 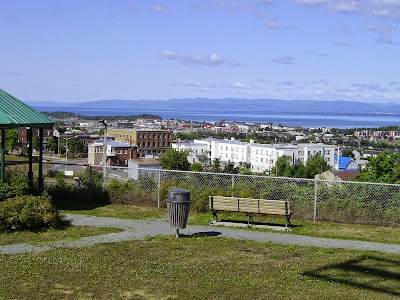 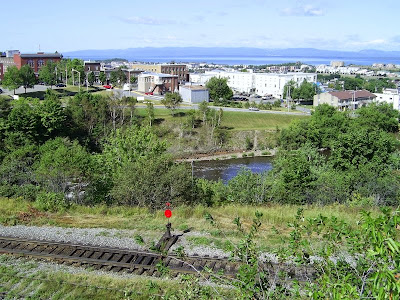 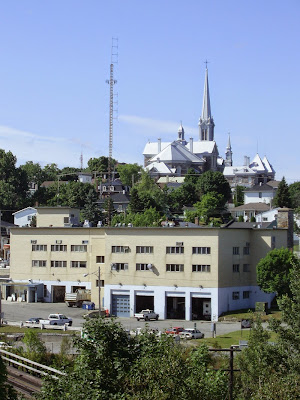 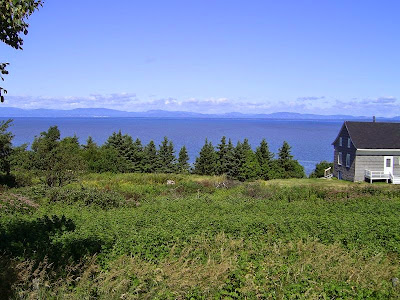 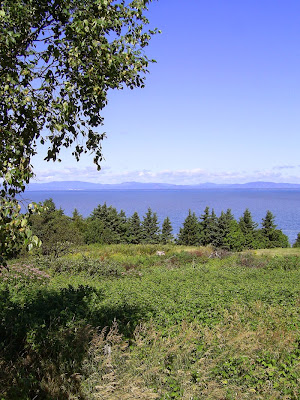 As I still had about 12 hours drive to reach Toronto, I got off Hwy 132 onto Hwy 20 and started to drive back. Along the way I again stopped at the tourist info centre and also a few picturesque spots to take more pictures.

Driving back through Quebec City, Trois Rivieres I reached Montreal city. The heavy traffic in Montreal meant I was delayed by 45 minutes before I could enter Highway 401. Near Brockville as I exited Hwy 401 to enter the 1000 Islands Parkway, I packed some fish and pulled by at one of the view points overlooking the St. Lawrence River  near the 1000 Islands, to eat it. 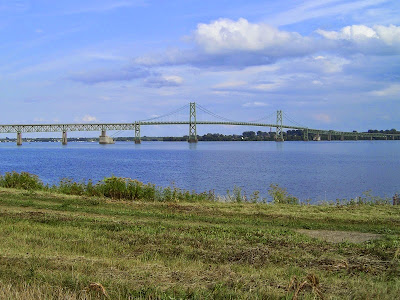 Joining the Hyw 401 again, I was glad the traffic was smooth as I approached Toronto. I was back in the city well before midnight to have a peaceful sleep after a wonderful 8 day journey to some of the most beautiful places on earth.

Looking back on the trip, I was glad almost all the things I did went according to my plans, even if such plans were drawn up in a short time. The car drove perfect, it never troubled me helped by the fast that the roads were top class - even in the remotest of areas. Taking a decent digital camera apart from a film SLR was a good idea as I could take pictures without worry. The people I met in the journey were wonderful and most of them very helpful. I didn't miss home food much at least in the first 2-3 days as I had deep frozen the food and carried the same in a ice box with the ice being replaced a regular intervals. And those were the days when the data packs and wireless internet was not as cheap as it is today particularly to use the google maps. I had to mostly depend on the road atlas I carried with me and some times missed the exits. The dark car meant that the car got hotter than usual and I also had my skin tanned as the car's windows were not tinted. And for some strange reason I forget to carry a good search light instead depending mostly on my car's headlights in the wilderness.

Click here for the first story in this series
---

For more information about a destination, have a tourist destination or your property listed on this page or to buy an image please email the author at tumkurameen@gmail.com
Amherst Brockville Edmunston Miramichi Moncton Montreal Plaster Rock Port Hastings Quebec City Riviere-du-loup Truro