As one leaves Quebec province to cross the Inter-provincial Bridge, it merges with the 'Appalachian Range Route', proudly showcased by New Brunswick province and deservedly so. The route leads to the remote Mount Carleton Provincial Park, which offers sweeping views of Canadian portion of Appalachians. The land changes colours in sparsely inhabited, densely wooded regions and rich, rolling farmland striking spectacularly against undulating terrain, as one again drives down Appalachians along the vast Saint John River valley.

Day 3 (continued)I was finally down the mountains along the Route 132 till I reached the interprovincial bridge over Restigouche river leading to Highway 17, a few km before Campbelton. I drove my car along the banks of the river to a popular fishing spot and stopped to have a view of the picturesque surroundings.
Filling the gas at Glencoe village I hit highway 17, part of the scenic ‘Appalachian range route’ promoted by the provincial Government of New Brunswick. I marvelled at the amazing construction of the road, cut through tall mountains and forests. There were places where I touched a 150km/hr for miles with no one in sight. The highways seemed newly constructed and it seemed the province of New Brunswick was going great lengths to build infrastructure to promote tourists.

Till I reached the highlands the region was sparsely populated and was covered with dense forests. The highlands were beautiful, again with rolling farmlands covering vast stretches. I drove along Route 17 till I reached St. Quentin.

Route 180 from St. Quentin on the way to Mount Carleton Provincial Park was not as scenic as Hwy 17. It was a single road with two  way traffic and not in the best of conditions. But nevertheless it made an exiting drive. Hwy 385 deviated from Route 180 and lead to Mt Carleton Park. The road seemed OK for a couple of km but for 7 km it was a gravel road. Although it was an exciting drive, I didn't expect the road to be in such a shape.

The entrance to Mount Carleton park was similar to the ones any where else in Canada. A hut shaped room where tickets had to be purchased to camp in the park. But Mt. Carleton was refreshingly different from many of Canada's well known parks. It was remote, wild and hence the usual non-serious wildlifers were absent. The park did n’t have any entry fee for daily visitors. The entrance staff were friendly and highly informative though they spoke English with a French accent. The park contains Mount Carleton which at 820 metres is the highest peak in Maritimes. Though many visitors come to camp and hike, the many view points that provide panoramic views of the Appalachian range. The dirt roads within the park are accessible by a regular car. One can go around the three different lakes in the park and expect to see forest and sometimes mammals like moose.

I left for Plaster Rock, my next destination. Though originally I thought of driving back to St. Quenten to take the Hwy 17, instead I took Route 108. It was a good choice for me as I passed through dense forests, wild rivers and remote communities. 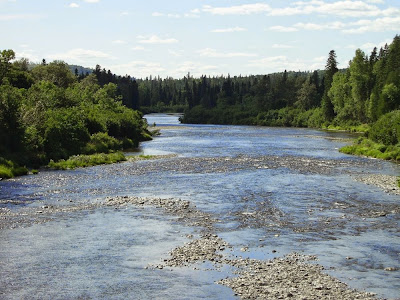 
Grand Falls was basically water from a river dammed over a gorge. A good view of it could be had from the bridge within the town. The rocks that form a part of the river valley have a beautiful formation. A cup of coffee and I was off to my next destination - Fredericton. 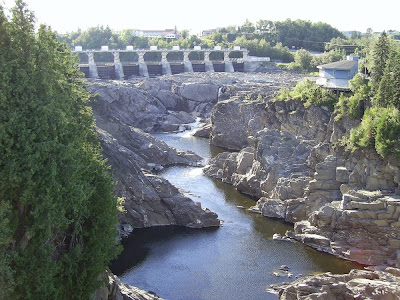 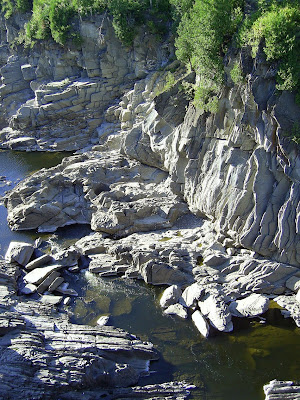 As one leaves Grand Falls and approaches HY 2, there is a beautiful view one can have of the surrounding countryside. Confused about the way to Fredericton, I asked a middle aged couple driving a car in Grand Falls to help me to get on to the Highway to Fredericton. Unfortunately I missed the exit and entered one of the roads leading to farms in the countryside. To my surprise the couple were actually following me and took me back for a couple of kilo metres to the right exit and gave me a send off. Their hospitality more than impressed me. It was quite late in the afternoon with the shadows growing tall as I began driving to Fredericton. The roads were amazing, so was the landscape. A lengthy part of Highway 2 as it leaves Grand Falls towards Fredericton is very close to the international border with the US.

At sunset I pulled the car off the road and slept in it for an hour or so. I began driving again at 10 PM and reached Fredericton at 10 PM. I could n't find accommodation at the youth hostel which was closed at 11 PM local time. I had not realised I had entered a different time zone and had to turn ahead the clock by an hour from Toronto time.

For more information about a destination, have a tourist destination or your property listed on this page or to buy an image please email the author at tumkurameen@gmail.com
Appalachian Range Route Canada East Canada Grand Falls Maritimes Mount Carleton Provincial Park New Brunswick Plaster Rock