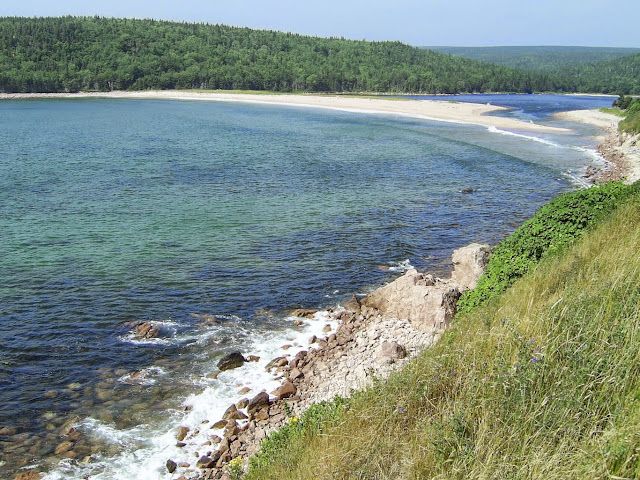 It was my time to return home to Toronto. I left Pleasant Bay village along the Cabot Trail towards the village of Neil's Harbour taking the same route that I had taken to see the sunrise. After some distance, the trail turned south along the eastern part of the park. The trail was now traversing in and out of the park, along clean and beautiful beaches.

This Atlantic coast is dotted with fine-sand beaches in the eastern part of the park, like the beach at Black Brook Cove, few metres off the trail along the edge of beautiful forests. It was a refreshing site to see the beach less crowded, unlike many North American beaches. 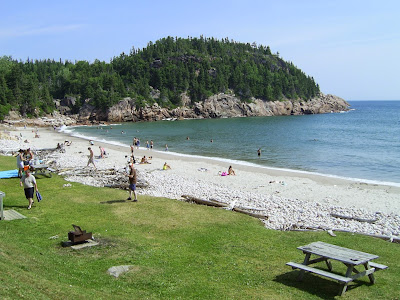 The road traverses below the highlands at sea level along its eastern part. The landscape altered between coves and headlands, creating many scenic outlooks. There are many scenic outlooks along here like MacKinnon's Cove and Lakies Head. Off the roads were hiking trails that lead to dense forests and also the beautiful Chute Mary Ann Falls.

The Black Brook Cove is a huge granite rocks gracefully lining the coast, turned pink due to constant beating of open ocean waves. At first sight, these rocks reminded me of the famed pink colour of Jaipur City. 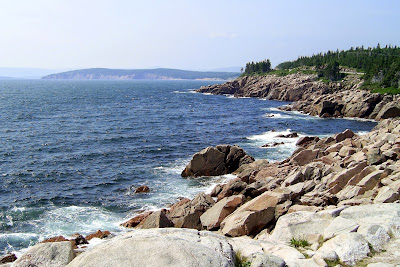 More of Cape Breton Island's beauty - Beautiful sand beaches of Atlantic
The Keltic lodge is located just as you near the park's southern boundary. It offers nice views of the ocean. If you are a bird watcher, you can walk across to 'Tern Rock', a breeding site of Arctic Tern, which migrates the longest distance for any bird in the world.  The tourists began to increase as I drove towards Ingonish village. Due to lack of time I had to skip the Middle Head area and had to just pass by the Ingonish Beach another beautiful, fine-sand beach that is present just beyond the Keltic lodge.

I drove ahead up the 1200 feet tall Cape Smokey Provincial Park. True to its name, I found a white mist obscuring my view from watching the sceneries around. The road winds along fresh water lake before it begins to ascend up the hills again at South Inguinish Harbour. The area at Smokey Mountain is at a good elevation, high enough to allow unrestricted view of the surroundings. I stopped for a few minutes at the Cape Smokey Provincial Park but the large number of tourists and the hazy sky forced me to depart from the place early. The road did not offer many views once I descended down the Smokey Mountain area till I reached Indian Brook. 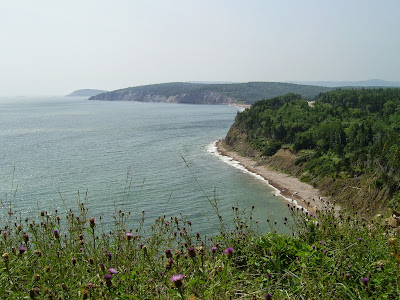 At the water edge on route 312, I realised that I had to cross the bay on a ferry and there was no bridge. I had the option of either driving around the St. Anne's bay and continue along the scenic Atlantic coast till it reaches Baddeck or taking the ferry at  St. Ann's Harbour. I opted to take the ferry to reach Englishtown directly. Awaiting my turn to take the ferry I interacted with the friendly locals waiting to board the ferry like me. I realised I forgot to withdraw cash from the ATM and one of the locals awaiting his turn to get his pick up ferried informed me that they don’t accept card. Turning back I asked him for the nearest ATM machine who said I had to drive back a good 18 km for the same. He then handed me a ferry ticket worth $5 with a smile on his face for which I thanked him. I seemed to be having more than my share of good Samaritans on this trip.  As usual this local was a good source of information to scout for nearby places of interest. 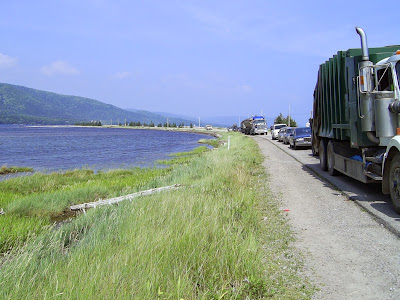 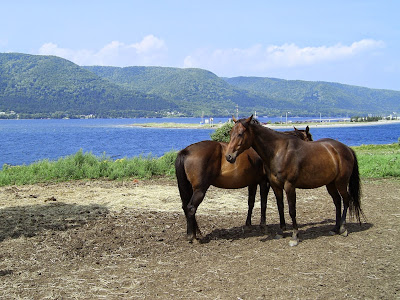 The ferry ride was short and took just about 3 minutes to reach the other shore. Around this route, there are several private tour companies that take visitors on boats to see beautiful birds like Atlantic puffins and razorbills. 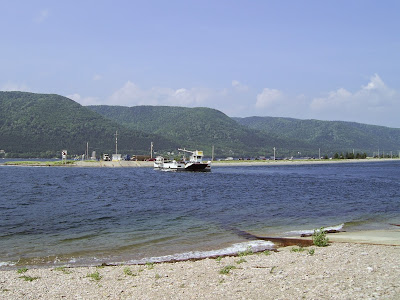 From English town the drive again was very picturesque. On way to the City of Sydney, my next destination, I stopped by St. Ann's Provincial Park. It has panoramic views of the beautiful St. Ann's Bay, its harbour and the surrounding hill range. The views as one drives up the St. Ann's Bay are worth looking around. On one side the foothills of Appalachians reach up clothed with lush vegetation with the Atlantic waters flowing from south to north. 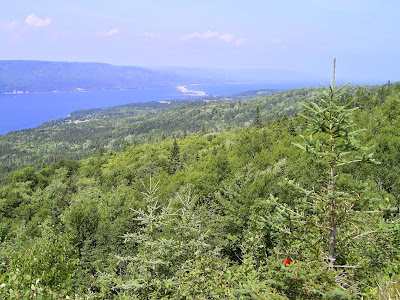 Half a kilometre after the road from English Town meets the Highway 105 towards North Sydney, there is a scenic outlook known as St. Anne's viewpoint. The scenic view point provides a spectacular view from atop 245 metres above MSL of the St. Ann's bay below. It's worth a stop.

A few km from here on the other side of the ridge, the view towards east of St. Partricks channel is equally beautiful - blue water, rising hills clothed with dense forests and also the long bridge that takes one above the waters. 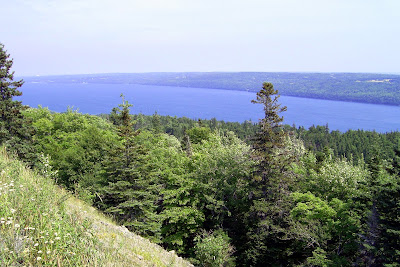 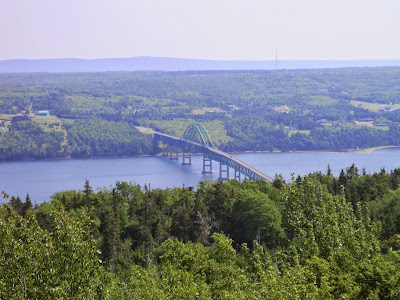 Descending to the bridge and crossing it, I drove down to Sydney. In 2005, when I visited here, Sydney town was still recovering from the impact of the industries that have been shut down in the region and I did not spend much time there. After driving in down town Sydney for half an hour, I took Highway 4.

The beautiful journey back to where I began in this Island
It was time for me to head back to Port Hastings, the start of my journey inside the Cape Breton island. I took the Bras d'Or lake scenic trail and drove along the scenically beautiful Bras d'Or lake, stopping on the way to eat my brunch of fish burger that I had purchased on the way. I stopped to have a breath taking view of the Bras d'Or lakes from a park besides road at Irish cove

The Bras d'Or is a unique inland salt-water lake system stretching for 80 kilometres and is famous with sailing enthusiasts. The lakes are a traditional home of Mi'kmaq, natives of Nova Scotia. They have been living here for thousands of years, much before the first Europeans set their foot in. Visitors can visit their Reserves and at one of them, the Wagmatcook Island, there is a cultural centre where native craft is available for purchase.

I continued my journey along the Lake Shores with expansive blue skies and clear water. The Alexendar Graham Bell National Historic site, housing items belonging to the famous inventor of telephone. Bell who settled along the shores of Bras d'Or lakes was once asked why he did so. He quipped, "I have travelled the globe. I have seen the Canadian and American Rockies, the Andes and the Alps and the highlands of Scotland, but for simple beauty, Cape Breton outrivals them all." As I drove back towards Toronto, I was pretty sure why he meant that. 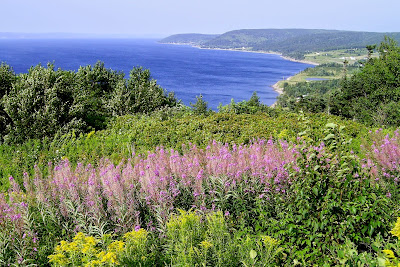 Continuing my journey on the beautiful road, I reached Marjoree Harbour at Canso Causeway. There are few places in North America to match the gracefully blend of enchanting views, untamed wilderness, interesting maritime culture and warm people that can be experienced in Cape Breton Island particularly along the Ceilidh train, Cabot trail and Cape Breton Highlands National Park. A visit to this Jewel of Canada’s Atlantic will tell you why.

For more information about a destination, have a tourist destination or your property listed on this page or to buy an image please email the author at tumkurameen@gmail.com
Black Brook Canada Cape Breton Highlands Cape Smokey Englishtown Ingonish Neil's Harbour Pleasant Bay Port Hastings Sydney