Summary:
I drove with a couple of non-wildlife friends from Bangalore to the forests around MM Hills that were until a few years ago the safe haven of a fascinating character named Veerappan. Along with his accomplices Veerapan was accused of killing dozens of law enforcement staff, from policemen to forest officers, chiefly in these forests. He had made these forests his home for much of his life. According to my interactions with sources- villagers, local forest staff, policemen posted to capture him, forest staff kidnapped by him etc across this vast forest belt, since mid-1990s, Veerappan knew the forest like the back of his hand. He combined this knowledge with his extremely well connected network of informers as well as support/ fear by his fellow caste members to survive in this hostile terrain. He lived amidst wildlife like royal Bengal tiger, Asian elephant, king cobra as he dodged the law for over a decade. Though this blog post is not about him, the content of it is influenced heavily by him as these forests still resound with stories told by people who survived both him as well as his hunters. 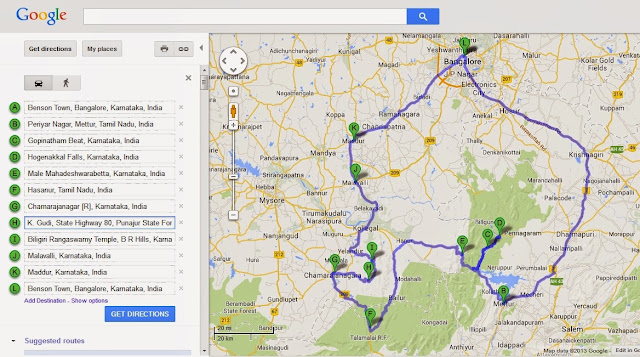 All roads in a decent shape, except the 20 km Palar - MM hills stretch and also the 20 km Malavalli - Maddur stretch (both in Karnataka). Though we travelled in a Renault Duster, the roads are in a fairly decent condition to accommodate even small cars (Alto, Santro etc).
----------------------
Leaving Benson Town in Bangalore at 8:15 AM on 1 Nov. 2013 we took nearly 3 hours to cross Hosur town, a distance of about 40 km, thanks to the Diwali festival traffic. For those of you from West, Diwali is India's Christmas equivalent. We felt about 60-70 percent of this traffic constituted of people driving to Hosur town to buy firecrackers. Apparently they can be bought here for a quarter of their selling price in Bangalore.

Just past Hosur town, the highway cuts a stretch of  dense scrub forest, which according to Google maps is the Perandapalli forest. 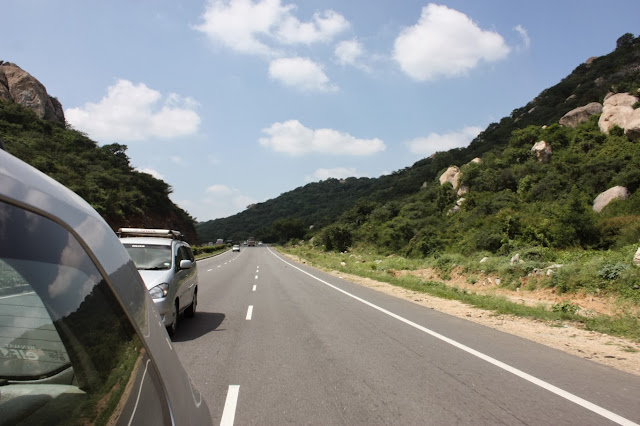 Beyond Krishnagiri, the highway meanders along the Ponnaiyar river for a few kilometres as paddy fields interspread with coconut trees form a picturesque green cover during this time of year. Ponnaiyar is also known as South Pennar or Dakshina Pinakini. It takes its birth in Nandi Hills, north of Bangalore, before flowing down into Tamil Nadu where it meets the Bay of Bengal.
Just after forest surrounded Thoppur ghat section, we exited the National Highway into the Thoppur - Mettur Dam - Erode road. Near Erumaipatti village we stopped briefly to buy custard apples whose sellers dotted this stretch of the road.


As we turned our faces towards east we could view the beautiful Thoppur reserve forests. 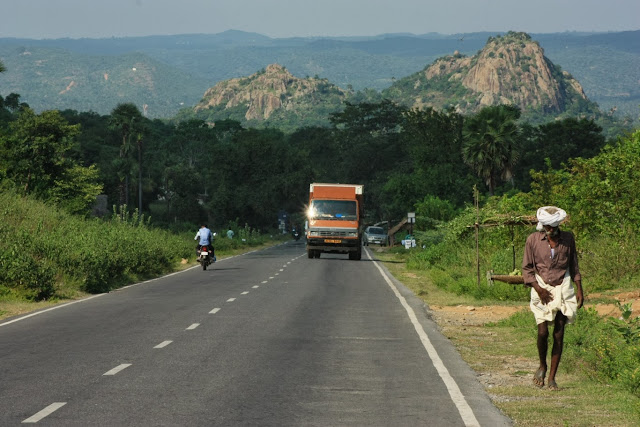 Eateries in little towns and villages dotting the shores of many freshwater reservoirs in India serve some amazing fish to eat. We had our share of the local fish with freshly cooked parotas, a type of Indian flat bread, at one such eatery located bang opposite the main entry of the Chemplast Sanmar plant, near the Stanley reservoir.

From Mettur we drove to Hogenakkal Falls on the Karnataka side via Palar and Gopinatham villages.

The state of roads in Tamil Nadu was good throughout the journey including the border areas. About a km after Govinapadi village dense forests greeted us. There are numerous forest streams flowing down the wooded valleys as one nears Palar village just across the border in Karnataka state. And one could make out the difference in the road condition once we again entered Karnataka.

At the entrance of Palar village we took a right turn (north) towards Gopinatham. About a kilometre later the road enters the MM Hills wildlife range of the recently expanded Cauvery wildlife sanctuary, Karnataka.

After twisting and turning for a couple of kilometres amidst dense scrub and dry deciduous habitat, the road hits the Kaveri river and begins to run parallel to it. The river comes a long way after its arduous journey from its birth place at Talakaveri in Kodagu (formerly Coorg) District.

Some of the forests surrounding Kaveri river downstream of the Shimsha Hydel Project (Gaganachukki and Barachukki water falls) in Karnataka were notified as Cauvery wildlife sanctuary a few decades ago. The sanctuary was recently expanded to include more forests, particularly the forested hill slopes and valleys around MM Hills. The Tamil Nadu Government on its part announced in 2013 that a portion of the forests in Krishnagiri and Dharmapuri districts would be notified as Cauvery Wildlife Sanctuary. This is a great news for the contiguity and long term viability of the wildlife habitats that a catchment of many rivers. This will also no doubt benefit the wildlife here. Members and volunteers of Kenneth Anderson Naturalists Society (KANS) have played a significant role in the resurrection of Tamil Nadu side of these forests in the recent years. They deserve a huge applause for their tireless efforts to have these forests declared as a wildlife sanctuary by the Government of Tamil Nadu. They run an active group on facebook at https://www.facebook.com/groups/KANSMembers/?fref=ts

From Gopinatham village, MM Hills village is hardly 3 - 4 kilometres as a bird flies. Gopinatham and Palar villages were synonymous with the mystery of Veerappan's character and were considered his strongholds. Driving further along the Sengapadi- Marukottain road it was almost dark as we reached Hogenakkal falls. To see the actual waterfalls you need to take a short ride in one of the numerous theppas (Indian coracles/ locally made boats) that are manned by locals. We decided to skip the boat ride given the fading light.

The Kaveri river here separates Karnataka and Tamil Nadu. Just across the road is the road to Dharmapuri town which is about 48 km from this place. But the river prevents four wheelers from crossing over. If you are with a 100-cc motorcycle a theppa ride can help you ferry it across the river.

The long drive had taken a toll on the time as we started amidst darkness for MM Hills from Palar village. This stretch of road is supposed to be picturesque with the forested valleys and hills all around the road. Unfortunately we missed witnessing them.

We halted at the forest rest house at MM Hills as loud speakers blared music from the nearby temples, this being the annual 3-day jathra (religious fair) of the famed Male Mahadeshwara temple. Fortunately the forest rest house is a some distance away from the village and the loud music didn't disturb our sleep much. We took a short walk post dinner around the forest rest house campus and sighted a wood owl on the hunt. As we returned, tens of different varieties of insects and moths greeted us, as they gathered around the tube light in the verandah.

Any interaction with the villagers and forest staff of the places where Veerappan roamed are incomplete without hearing stories about this man. We had our share of lively narration of the many incidents that apparently happened in MM Hills, the surrounding villages as well as forests from the care taker of the forest bungalow. The forest bungalows in the region have framed pictures of Mr. Srinivas an IFS officer who was allegedly brutally beheaded by Veerappan, a reminder of this area's bloody past. 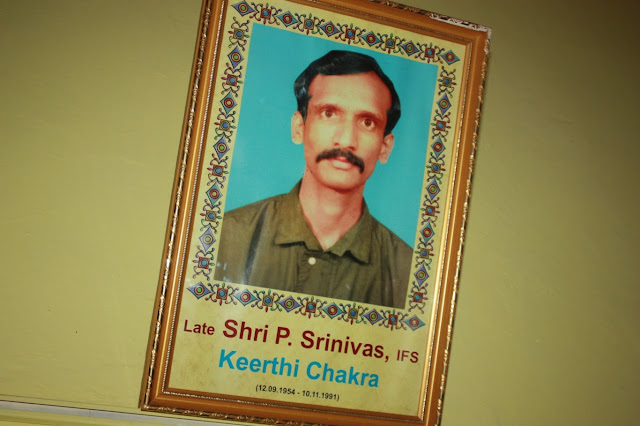 The next morning, we had a breakfast of rice idlis and coconut chutney at the canteen inside the KSRTC bus stop in this village. As we drove downhill towards Kowdhalli along the MM Hills - Mysore main road, we could see the many beautiful forest valleys that encircle MM Hills.

According to media reports a decision to declare 906.18 sq km of 1,224 sq km of the Kollegala Range forest as Male Mahadeshwara Wildlife Sanctuary was taken during the fifth meeting of the Karnataka Wildlife Board, Government of Karnataka held on 15 Dec. 2012. Although it is said that the then chief minister Jagadish Shettar, who presided over the meeting approved this, the same information is yet to reflect on the website of the Karnataka Forest Department as I blog this.

CLICK HERE to read the next leg of this journey