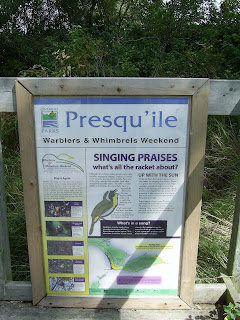 The region to the east of Toronto along Lake Ontario is less densely populated than to the west which leads to the cities of Burlington, Hamilton, Niagara falls and beyond to Rochester in the United States. Out on the east, one can have the pleasure of driving leisurely on the roads that have a comparatively lesser vehicle population as well. Also to the east along Lake Ontario are a string of provincial parks that protect rare vegetation and wildlife, particularly migratory birds. These parks are the equivalent of India's conservation reserve and community conserved areas being too small in most cases to be given the status of a wildlife sanctuary or a national park.
Among such parks are the twin wilderness of McLaughlin Bay Wildlife Reserve and Second Marsh wildlife area along with the neighbouring Darlington Provincial Park (read more), Presqu'ile Provincial Park and Sand Banks Provincial Park.

Being less than an hour's drive from Toronto, Presqu'ile is an accessible paradise for birders in spring and fall when one can watch migratory birds in various hues. It falls along a major migratory flyway. Here's what Park Canada website has to say about this park:
"The park is a haven for migratory birds. About 126 species of birds nest here, and at least 321 species have been sighted enroute to destinations such as South America, the Arctic, Europe and Asia. Each autumn, the park is a gathering point for monarch butterflies as they begin their migratory trek to Mexico." (Read more)


Here are some pictures of Presqu'ile wilderness areas taken around 2005.