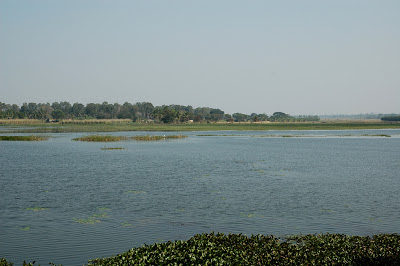 It was early January in mid-1990s and the road overlooking Kunigal chikka kere marshland, 75 km west of Bangalore city, was desolate, except for a few bird watchers. With the monsoons gone and the dust settled down, we were taking part in the annual mid-winter Asian Waterfowl Census. Our eyes caught a greyheaded fishing eagle that had perched itself on one of the trees lining the lake. The eagle looked ahead, as the orange sun ball rose up the horizon. The mist veil steadily disappeared, offering beautiful vista of the granite hills of Konkekallu that continue to the magnificent Savanadurga. Underneath the eagle's watchful eyes a coot shrugged water off its wings by rapidly flapping them. The coot was preparing itself for the wonderful winter day ahead. The eagle moved its gaze towards purple moorhens located a short distance away. As one mother moorhen was readying its young ones to venture in fresh water to teach them to feed, the eagle broke cover and swooped down. Before the moorhen family realised of the happenings, one of them was in the firm grip of the raptor's sharp talons above. As the terrified waterfowl scurried for cover amid the aquatic plants, the raptor rose as gracefully as it had descended, looking out for a perch to feed on its hard earned food. 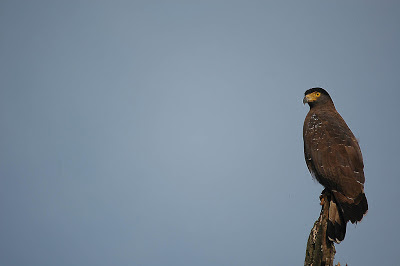 An hour into the day, the sun sprinkled pleasant shine around us, dispelling the cool winds that were piercing our bodies. The stage was now set for a huge flock of northern pintail ducks to make a 'safe' landing in the now clear water. In no time, the lake was a myriad of bird sounds. Those were the pre-cable TV days and we relished every minute of the action – action that any nature channel now would be too eager to document and air.

About the Asian Waterbird Census
Launched in the Indian subcontinent in 1987, the Asian Waterfowl Census (AWC) is an annual event that is usually scheduled during the second and third weeks of January. The census aims to annually record information of waterbird populations at wetlands in the non-breeding period of most species, to annually monitor the state of wetlands and to promote wetlands and waterbirds conservation by encouraging people to visit them.

The Asia Pacific unit of Wetlands International (WI), formerly Asian Wetland Bureau and Asian Waterfowl Research Bureau (IWRB), organises AWC. Many governments, along with NGOs and individuals, co-ordinate it. It is organised parallel to other major international census of waterfowl in Europe, Neotropics, Africa under the aegis of the International Waterfowl Census (IWC). To date, more than 6,300 sites from 32 countries have been surveyed, with the active participation of tens of thousands of volunteers.

AWC in Karnataka
In Karnataka, the census was supported by the popular bird magazine, Newsletter for Birdwatchers (NLBW) in 1987. Says S Sridhar, the publisher of NLBW, "The Census was started in the winter of Dec 1986–Jan 1987 with the help of local bird watchers. It slowly expanded and at one time 330 wetlands throughout the State used to be monitored."

Environmentalist A N Yelappa Reddy, who then was the Secretary of Ecology and Environment, Government of Karnataka, requested the District Forest Officers (DFOs) to extend their help to bird watchers in conducting the event. A meeting was organised in 1990 by NLBW for nature clubs and bird watchers from around Karnataka, says Honourary Wildlife Warden of Tumkur T V N Murthy. Murthy, who was one of the participants, adds, "The encouragement by bird experts from Bangalore like Dr Subramanya and J N Prasad helped birders from towns like Tumkur, Hassan, Mandya and Mysore to fan across wetlands in their districts to record the winter visitors.” Since then, year after year, hundreds of bird watchers across Karnataka, like their counterparts throughout Asia, have been visiting wetlands in search of waterfowl.

Volunteers come from diverse walks of life - from school students to nature club members, and from amateur bird watchers to professional ornithologists. They scout water bodies - both man-made and natural, for water birds and also birds of prey (which feed on these waterfowl). The data collected is then used to fill standardised data forms. In each country a volunteer national or regional coordinator uses a network of volunteers by sending and receiving data forms and then compiles reports. This data is annually sent to international coordinators who use it for international reports. 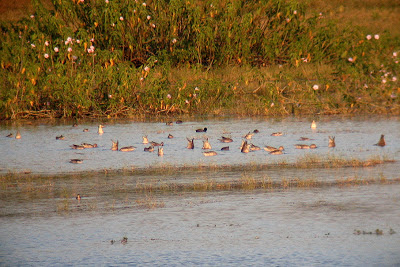 Success of the census
According to WI, this census is "the largest biodiversity monitoring programme in the Asia-Pacific region, one that monitors millions of waterbirds and their key wetland areas in the region."  Adds S Sridhar, "The event let us identify the threats these birds were facing, like poaching. We used the information to help curb illegal activities at many places."

According to ornithologist M B Krishna, "We participated in the waterbird counts from the very first year the programme was started. From the Bangalore point of view, I am happy that we took it beyond what the IWRB visualised. We actually converted the waterbird count into a full-fledged wetland survey in 1989 and 1995. The findings and knowledge which we gained, came in handy to help the Karnataka Forest Department make proposals under schemes like NLCP and NORAD, which was the incentive for government to launch the Lake Development Authority (LDA)."

Says WI, "The information collected by AWC has contributed to various international agreements, such as the Ramsar Convention on Wetlands and the Convention on the Conservation of Migratory Species of Wild Animals; international initiatives, such as the Waterbird Population Estimates, Important Bird Area and Globally Threatened Birds updates programmes; regional flyway initiatives; GAINS avian disease surveillance and early warning systems; national and local waterbird and wetland conservation; and management efforts in all the participating countries."

In a nutshell, the census has been extremely successful in achieving its primary aims. As a result of increased awareness, local people and governments are now setting about the conservation of important sites in almost every country. The many protected wetlands across Karnataka are a living proof of this.

To keep yourself updated about the event in Karnataka, email to subscribe@bngbirds.yahoogroups.com