From Jog falls to the 'green seas' of south-east Asia

I fell in love with rain-forests the first time I saw them on the drive to Jog Falls in Western Ghats. This was in early 1983, with my immediate family. These continue to awe me. The most recent being in south-east Asia.


First impression, always the best
It was spring (early-April) of 1983. I guess I was in Grade 3  or 3rd Standard as we call it in Karnataka. I was visiting North Karnataka in a hired Ambi (Hindustan's Ambassador brand car) with my parents, my extremely naughty elder bro and kid sis. I had an aunt living with her Doc hubby and kids in Hubli, Dharwar District. We drove to Hubli, from hometown Tumkur, on the Bangalore - Mumbai National Highway 4. Those were the days when we crossed more trees than trucks through the drive. I still remember the neatly lined, fruit-bearing avenue trees. There were Jamun trees till near Kalambella village before the erstwhile Mughal provincial headquarters of Sira Town. From there on tamarind trees bordered the highway all along till Hubli. We ate our packed breakfast and lunch below these tamarind trees. There were many flower bearing trees - I remember Gulmohar and Jacaranda, inter-spread amidst the above two species. Oh yes, the landscape was sprinkled with banyan trees too. But they were few, mainly in the water fed troughs in the gentle valleys below the many 'keres' or 'talaabs' - man-made wetlands as they are known in the regional language Kannada and Deccani Urdu dialect respectively. The Bangalore - Hubli railway line cut through the highway at many points and made us wait at the manned-level crossings. But the trees were always there to give us the shade. From Hubli, my father decided to drive us back to Tumkur through the beautiful jungles of Dharwad, Uttara Kannada and Shimoga...
---

We left Hubli early in the morning and I got my first birding lessons when Abba (father) showed us the occasional 'Junglee murgee'(in Deccani Urdu) or Grey Jungle Fowl feeding on the forest edges besides the road and scurrying back below the canopy on being approached. Jog Falls is not as pretty a sight in the summer as it is during the monsoons. But the nearly 1,000 feet steep drop left a lasting impression on my mind. Back towards Tumkur, from Sagar town, it was then a little bigger than a village, we drove on the cemented road. I had heard that this road was laid around independence when these districts were a part of the old Mysore state.


I visited Jog Falls again with family, in early August of 1989, when the monsoons had converted the region into magical green. But as compared to 1983, I found more humans around, so was the agriculture - at the cost of forests.

Beyond Jog, I got my taste of the less disturbed rain-forests of Dakshina Kannada and Hassan district when I crossed the Ghats on my trips to Dakshina Kannada district in the south-west monsoon (July) of 1994 ('less' meaning no dams). In the same year, entering a professional course meant a less spying middle-class father, who was half done with his share of raising a male kid in this traditional part of South Asia (the other half is when the boy gets a good job to settle down in life, marry etc). It meant taking more freedom to sneak back into these green seas, some thing that was to become an addiction soon. The giant trees inside overshadowed and humbled me every time I stood before them. There were miles and miles of these in front of my eyes, more disappearing than appearing in the monsoon clouds. I began roaming the length and breadth of the ghats extending far south to Shendurney wildlife sanctuary in Kerala, through the  Bisle-Pushpagiri belt, Talakaveri-Sampaji stretch, Mukurti - Silent valley, Anamalai and Idukki-Periyar. I did so - paying homage to these at Makutta Reserve Forest (above picture) between Brahmagiri and Talakaveri sanctuaries, even a couple of weeks before immigrating to Canada in Oct 2002.

From south Asia to south-east Asia
The rain-forests of south-east Asia have fascinated me for long. I had read about them in books and seen pictures of them. Cable television images of the Borneo rain-forests, particularly the devastating forest fires that ravaged the region in 1998-99, increased my curiosity. I wondered how extensive these forests might be, as fires in them - something that we see so often in India's forests every summer, sent entire countries in prayers for rains. 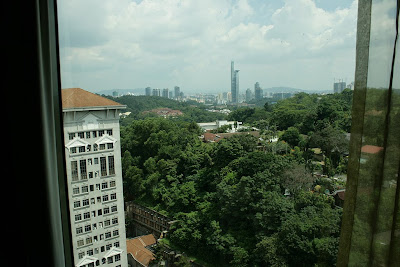 I got a chance to see a glimpse of these when I visited Malaysia's capital Kuala Lumpur (KL) to attend a meeting with my communication colleagues in WWF's tiger network, in Nov 2009. I stayed at Eastin Hotel in Petaling Jaya a few km from down town KL. KL is a beautiful city. It is clean and green, just like my previous home city Toronto in Canada. The view from the hotel was very interesting and showed the city's green cover.

My return flight was late in the evening on Sunday, 14 Nov. Ms. Shuba from WWF-Malaysia was kind enough to drive me to FRIM (Forest Research Institute of Malaysia). Located about 15 km from the city centre of Kepong, FRIM is a 600 hectare forested campus that has numerous trails for nature walks and birding. It was late in the morning as we entered the campus. We were very keen on one thing - walking on the the rain-forest canopy walkway, among the prime attractions here. The walkway was a vigorous 20 minute ascent through a nature trail amidst the rainforest. It was not the best of times for birding, but I followed a similar sounding sound to track a Rackettailed Drongo on one of the branches along the path. The walk reminded me of the trek from Beedhalli hamlet (at the eastern entrance of Pushpagiri Wildlife Sanctuary) to Kumaradhara/ Pushpagiri peaks. The ever green trees were similarly tall and their girth as well as shape was similar too. 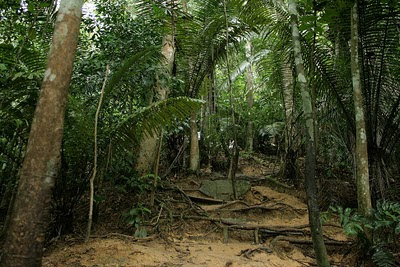 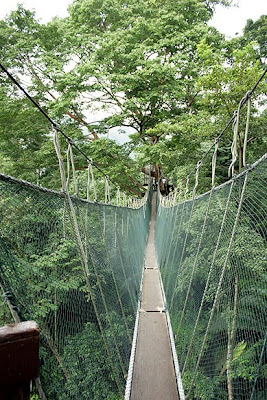 At the entrance of the walkway, there were many school kids ahead of us and we had to wait for our turn. Suspended 30 meters above the ground, on a hill slope, the walkway offered an excellent feel of the rain-forest canopy in which it is located. This, apart from panoramic views of the rain-forests around, as well as the distant tree covered neighbourhoods of KL. 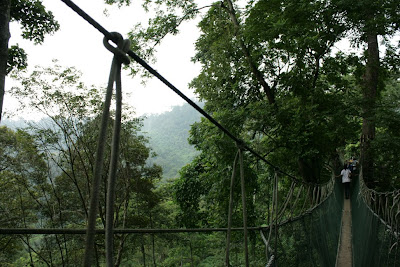 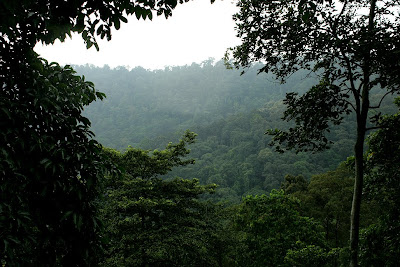