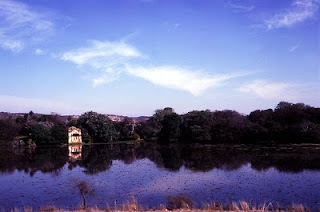 I was at the western edge of an expansive lake and the view from my jeep was absorbing. A number of sambar dotted the lake feeding on vegetation. A big herd of chital grazed at one edge of the lake, lifting their necks every now and then to watch anything unusual. Migrant ducks carried on their activity - disappearing in the golden water for a few moments, only to reappear some distance away swimming leisurely. A saunder of wild boar grazed at the junction of the marshy grassland and water body not caring about the alarm raised by the redwattled lapwing pair, disturbed by a probing mongoose. The sun was a few minutes away from turning this February sky into colours of various hues, after which darkness would rule this land of royal wilderness.


As my eyes followed a flock of birds into the never ending sky, a huge noise was created by the wild boars scrambling off the slush into nearby forest. An eerie silence followed for a few moments as my jeep driver hurriedly whispered " Saab tiger dekho", pointing out to the grasses near where the wild boars were grazing. I scanned entire length of the grassland through my field glasses but nowhere was the king of the jungle in sight. It was gone as soon as it had come. A small distance away, the silence of the evening was shattered by the desperate cries of chitals and langurs, warning their brethren of the impending danger. The sambar stopped grazing and very nervously began to move out of the water one by one, not knowing what the dense forests held out to them. I was at Ranathambhore, among the richest national parks of India- both in natural wealth and history. The 1000 year old Ranathambhore forest over looked this north western limit of the royal Bengal tiger amidst the forest clothed Aravalli and Vindhya hill ranges.

From a common man interested in spending some time amidst nature to a serious wildlife photographer eager to capture the rarest wildlife images, Ranthambhore is a paradise. The tigers of Ranthambhore are perhaps the most photographed in India. The open forests, lush meadows, many water spots offer good oppurtunity for any one interested in sighting this pride of India's natural wealth, which is not as easy in many of the other well known forests. The stealthy leopard, elusive jungle cat, laughing hyaena, scavenger jackal, willy fox and the highly endangered caracal are among the other carnivores here. Herbivores like sambar, chital are found in plenty, while Bluebull or Nilgai, can be seen even on the outskirts of the park. Wild boar, chinkara (Indian gazzelle), mongoose, hare are the other animals likely to be seen. Birds like Indian tree pie are commonly sighted and water birds including storks and many migratory ducks abound the lakes. There are particular spots in the park to watch rare birds like collared scops owl. Most of the 270 species of birds recorded here, like the animals are used to tourists, hence photographing them is not difficult. 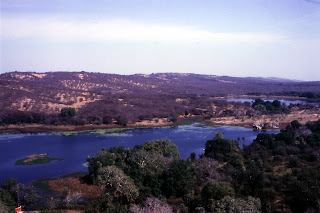 The vegetation is very interesting with grasses overgrowing plateaus and dense forests following the seasonal streams. The forest type is mainly tropical dry decidous and dhak, a species of tree capable of withstanding long periods of drought, is the commonest. Also many flowering species, particularly 'flame of forest' (Butea monosperma) add colour to the dry summers. Many huge banyan trees can be seen around the three big lakes padam talav, mallik talav and raj bagh which stud the forest like some costly pearls in a priceless jewellery.


Wildlife is just one of the many reasons to visit Ranthambhore. The Ranthambhore fort from which the forests derive their name, has a long and rich history of 1000 years. The fort is strategically located atop a 700 feet hill within the park. The fort is believed to have been built in 944 AD by a Chauhan ruler and was once considered among the strongest in North India. The fort was the scene of many bloody wars between the local rulers and muslim invaders. The picturesque views from atop the fort are worth a hard climb. All along the climb a number of interesting monuments can be seen. The Ganesh temple on top of the fort attracts more than 1 lakh people during the annual fair in September. An old dargah within the fort is also worth visiting. But visitors to the fort have to be very careful of troops of hanuman langurs waiting in ambush to snatch away any edibles.

Even the forest here has an interesting history. The area was first given the status of a protected forest in 1955 when a portion of the forest was constituted as Sawai Madhopur wildlife sanctuary. Due to massive decline in India's tiger population, the area was taken up under the project tiger in 1973 as a prime tiger habitat. In 1980, 274.50 Sq. kms of the forest was notified as Ranthambhore National Park. In 1991, Ranthambhor Project Tiger was extended to the adjoining Keladevi and Sawai Mansingh sanctuary and today covers a vast area of 1334 sq. km. 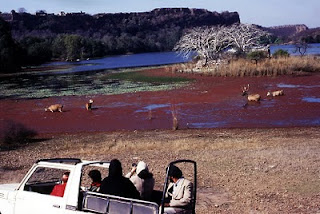 Planning your visit:
Sawai Madhopur, head quarters of the tiger reserve / national park is situated on the main Delhi - Bombay railway line. The nearest airport is at Jaipur (132 kms by rail and 180 kms by road via Tonk). The tourist information bureau is located within the Project Tiger office, about 1 km from the Sawai Madhopur railway station. Entry into the park is allowed everyday 3 hours each in morning and evening (the exact timings vary according to the season). Visitors have the option of going on safari in gypsy (max 5 persons) or a tourist canter (max - 20 persons). Entry fees and other charges are collected at Miserdara entrance of the park.

Where to stay:
There are many hotels and private resorts to suit all budgets in and around Sawai Madhopur. But unlike other well known forests, there is no accomodation for tourists within the park.

When to visit:
The park is open from 1st October to 31st June. The weather is extreme with freezing winter and upto 47 deg C temperature in summer. (the park is closed during monsoons)