Author spends a day atop a tree in Bandipur awaiting elephants. And ends up watching every other kind of wildlife except the jumbos 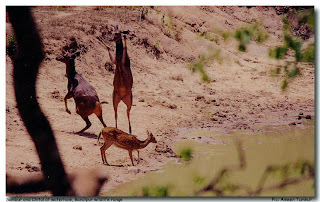 “Be careful,” advised Mr Pooviah, the sturdy Ranger of Bandipur, “there is a lot of elephant movement around that water hole”. The old van screeched to a halt near Sommayyana Katte on a late summer morning. Carrying our minimal wildlife gear and a bottle of water, I and clubmate Guru Prasad started walking towards the dried teak jungle, as the vehicle moved along the dusty game road. Though I was excited about being all by ourselves for a whole day counting elephants around a perennial waterhole, I was equally keen about finding a place to hide. A careful walk with one eye monitoring the waterhole and the other watching for any unwelcome movements towards us revealed the tracks of many herbivores including jumbos. The careful search also revealed that the vegetation was too dense around the water hole for us to sit.

Two different trees invited us to avail of their hospitality. We tried the nearest one but dense bamboo and lantana bushes prevented us from ascending it. After failing to climb the second tree I gave up this idea and walked back to the metalled track. I was expecting to catch the Ranger on his way back and requesting him to allot us a different water hole. Time passed by, but there was no sign of either the vehicle or my friend Guru. During the silent wait I could see many herbivores moving towards the water hole. Determined not to miss the action, I silently approached the second tree. I could already see Guru making a few minor adjustments for a long stay atop the high branches of the 40 feet high second tree, located to the south of the water hole. I followed suit, minus my shoes. Atop the tree, perfectly camouflaged by the green leaves that frequently sprayed us with cool air, we could also view at least three quarters of the waterhole as we settled down silently. Half an hour into our comfortable stay, an angry rumble arose from a tall bamboo clump to our east that alarmed the herd of deer drinking water. They hurriedly turned back into the woods. Elephants approaching, we both agreed. Would they come to drink the water? The next half hour proved they would not. Meanwhile, determined to beat the heat, a huge wild pig dashed blindly into the water. The more curious members of its family carefully followed suit. The huge male wild pig, the leader of this group, led it out after some time, displaying a sense of triumph. Shoulders and sharp tuskers pointing to the sky, the hair on the crest of its back stood erect.

That timid creature - barking deer, surveyed the waterhole in its cowardly style, slowly encircling the muddy waters. Keen on catching the slightest disturbance in the silent jungle around, it moved its ears to and fro bending down to quench its thirst, only to scurry back into the undergrowth as fast as it could. There were trumpets again in the jungle far west. Would they come this time… we waited. The improvised machan allowed us to have a clear view of many avians - sunbirds, flower peckers, jungle mynas, all caught unawares. A female sambur, which was monitoring the wetland for almost an hour, could not beat the mid-noon sun as it carefully descended. The rest of its group emerged out of the dried cover to join their leader.

While they drank to the full in the first few minutes, the only juvenile of the group could not hide its joy as it jumped repeatedly, splashing the water upon its elders. The young one stopped soon enough, silenced by the rest. All was still, but only for a few seconds. The prankster in each of them came to the fore as they decided to imitate the young one. The fight for maximum space resulted in an occasional ‘friendly fire’. After a while, one of the seniors suddenly froze in its tracks fixing its gaze on a bush to the south.

Sensing trouble, the herd walked out slowly, with the youngest one literally dragging its feet. It was well past noon and still no elephants in sight. Apart from an occasional call by Hanuman langur in one of the neighbouring trees and the distant alarm calls from grazing herds of spotted deer, probably on sighting a tiger or wild dogs, nothing else could be observed as we clambered down the tree at the end of stipulated time of this second day’s census of South India’s Asian elephants.Not a single elephant to be seen for an entire day at a prime water hole? We walked back to the forest office. The forest staff said elephants have an extremely sensitive sense of smell and usually avoid venturing near humans in forest. Possible, considering the fact that none of the animals could see or hear us except elephants. Whatever the reason, it was a mixed bag for us, this day.