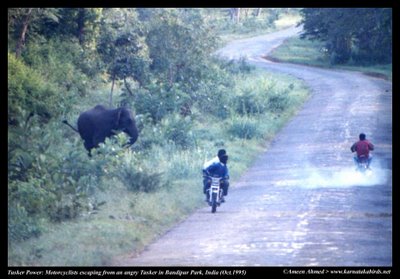 The first week of October is All India Wildlife Week. This week is a celebration of the magnificent wildlife, which our nation possesses. Just like previous years, even in 1995, I left on my annual wildlife week trial in the wilderness of Nilgiri Biosphere Reserve, eager to experience its rich bio-diversity. NBR- as it is popularly called, is spread across the three states of Tamil Nadu, Kerala and Karnataka. It encompasses some of the best-protected reserve forests of the Indian sub-continent and has the largest population of Asiatic Elephants in South India. These dense forests are haven to a rich and diverse variety of flora and fauna, many of which are on the verge of extinction.

My childhood friend-cum-nature guide Dr. Manjunath accompanied me and during the first three days we travelled over five hundred kilometres from Tumkur town, in our two-wheeler. We visited seven wildlife sanctuaries, the last two being Nagarhole and Wayanad, which are a part of NBR. In the process we were able to sight and photograph a variety of interesting wildlife.

After a good night’s sleep we woke up early the fourth morning and under cover of darkness reached Thorapalli check post, at the southern entrance of Mudumalai wildlife Sanctuary. At 6:30 AM, we reached Theppakadu reception centre, eager to enjoy the elephant safari. But as the number of tourists before us was more, our turn to enjoy these forests on Elephant back was an hour and half later. Hence we immediately left for Bandipur, situated twelve kilometres north. We rode leisurely along the mist-covered road. Although the fog made our wildlife sighting difficult, we felt being the luckiest persons to be in this forest. A forest lined by beautiful teak trees as far as the eye could see. A forest where one could hear the exciting music created by intermingling of swaying trees and calls of wildlife and where one could smell the fragrance of mud soaked by the overnight downpour. At Kakkanahalla forest check post, which divides Karnataka from Tamil Nadu, we had to abruptly halt for about three minutes as two male bonnet Macaques were engaged in a pitch battle in the middle of the road for supremacy of their troop. Obviously we were the guests and did not interfere in between!

Just as I was thinking of NBR having the potential of springing a few wild surprises, a young man driving his four-wheeler towards us gestured us with his hand to be careful. Co-rider Manju grasped this quickly before I could and said something unusual lay ahead. Barely a kilometre after this, we came across a lone, young, tusk less elephant, besides the road. We suspected it to be Makhana. Makhanas are male Asiatic Elephants that behave in every way as Solitary Tuskers but for the absence of tusks. Riding within fifty meters from it I exposed a couple of frames on my SLR camera, equipped with a 95-310 mm zoom lens. But very soon it begun to flap its ears, swung its tail and stamped the ground with its right fore foot. We quickly realised what this little giant was up to. Not wanting our host to be disturbed, we turned our bike and drove away about forty metres. With our bike turned on…just in case, we stood on the road waiting for the jumbo to go back into the forest so that we could proceed ahead.

Within a few minutes a van came in our direction and stopped in front of the elephant. The people in the van, particularly the children, became excited. Excited to the extent that, throwing all caution to air they begun to scream. Unfortunately, there was no one to stop them from shouting – except the elephant itself. Enough was enough felt the little giant. With its trunk raised it rushed forward, trumpeting at the highest pitch, which silenced every single occupant of the van. With a terrified group of passengers egging him, the driver started driving the van faster than a man in a rally would do. So did we! But soon the van over took us and the elephant was after us. It chased us as it would chase a bundle off black sugar cane. It stopped in its track abruptly, but only after covering a distance of about 100 metres. But we did not stop for another 300 metres, when we felt we were out of its reach. Turning back, we saw it standing on the road with its feet apart and trumpeting with its trunk raised. A small mistake and probably even our soul would not have been able to recognise our physical state.

We watched the elephant for sometime when it chased a couple of lorries and busses, none of which dared to stop near it. Crossing the road would have further enraged the elephant, which we wanted to avoid; hence we abandoned the idea of going to Bandipur. Then came the moment of our trip. Just as we were turning back to Mudumalai, four youth on two motorcycles came along the road from our side, wanting to proceed to Bandipur. We stopped and advised them to keep a safe distance away from the elephant. The four took us lightly and ignoring our pleas, went ahead. They stopped within five meters of the elephant directly facing it. One of them took out a box camera and using the fill-in flash, exposed a frame. That was all they knew of next. The little giant in its characteristic style, rushed ahead with its trunk lifted, trumpeting in a way that might have shaken every soul around. The two bikes took off opposite each other, without minding the right or wrong direction. The persons who took opposite to us had their bike struck up after barely covering a distance of about ten metres: in the heat of the moment the rider could not apply the gears properly. With the elephant closing in rapidly, the terrified pillion rider pleaded the rider, with fear, to do something fast. Suddenly, the bike started moving again. Most fortunately, before the elephant could reach them, they gained pace. Both the riders rode their bikes in a manner, which neither of them had ever ridden nor would they ever ride. Witnessing the drama all along from our bike, we took a few photographs of the entire incident. Although the elephant gave up its chase very quickly, both the motorcycle riders did not even look back for about half a kilometre. The ones who came in our direction, stopped besides us shivering and gasping for breath. We later learnt that the rider who rode opposite to us stopped only at Bandipur, a good five Kilometres away! As time passed by, there was a gradual build up of traffic and the elephant moved into the dense undergrowth besides the road.

After some time, we slowly travelled to Himavad Gopalswamy Hills, situated on the outskirts of NBR, to the north west of Bandipur. At a height of just over five thousand feet, Himavad Gopalswamy hills offer a panoramic view of the forests of Nilgiri biosphere reserve along with the blue mountains of the Nilgiris. As we turned back to our homes a couple of hundred kilometres away, we both had gained moments that would die only with us. We had silent prayers to God to preserve this magnificent part of Nature’s beauty which the so-called civilised man has been so willingly and uncaringly been destroying for his never-ending greed.
Bandipur elephant Bandipur National Park Bandipur Tiger Reserve Bandipur wildlife Chamrajanagar wildlife Elephant attack Mudumalai Nilgiri Wildlife Association Nilgiris Biosphere Wayanad Wildlife week