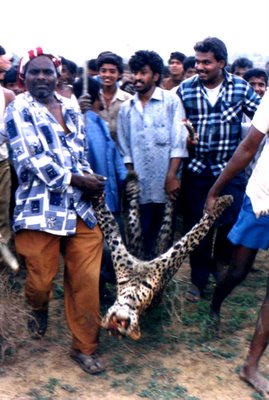 Tumkur District has been in the news for the past few days due to attacks on humans by wild animals. First there were wild elephants destroying areca nut grooves and killing a man in the month of March. Then there have been a spate of incidents where leopards have entered big towns like Tiptur, Tumkur and Chikkanayakanahalli. While a man was mauled to death by as leopard in Chikkanayakanahalli in May, a leopard was shot dead in Tumkur city by police personnel. While it looks natural to feel sorry for the victims of leopard attacks, it would be appropriate if we look at the causes behind this spate of incidents. Although leopard attacks on humans entering forests around villages are not new, the incidents of leopards entering big towns like Tumkur are of recent origin.

Leopards are not uncommon in the forests across Tumkur District. Fairly large patches of forests of the district like the state forests of Devarayana Durga, Thimlapura and Ujjini are home to a considerable number of leopards. Leopards being carnivorous mammals, their food consists of creatures like blacknaped hares, ground birds like Jungle fowls and partridges, different species of deer, monkeys and occasionally young ones of wild boars. The forests of Tumkur untill recently were home to a large number of the above prey animals. But due to severe human pressures – mainly hunting, cattle grazing, deforestation and habitat alteration, most of these animals are either locally extinct or their numbers are too small to sustain the existing number of leopards. There has been a drastic reduction in the population of prey animals and birds due to poaching. Not long ago a large number of ground birds like quails, partridges, and even peafowl and animals like blacknaped hares used to be sold freely in Tumkur town. It is only recently that these instances have come down due to increasing awareness created by local wildlife NGO activists and strict vigilance by forests department officials. Also there is severe biotic pressure on the forests and wildlife due to firewood collection and cattle grazing. Attempt by local forest officials to curtail these activities have resulted in political pressures on them. Even today quarrying is being carried on in revenue lands adjoining forests, which disturbs wildlife particularly nocturnal animals like leopards. All these, including a host of other factors, have put wildlife like leopards at a great to survive. May be this is the reason why leopards are being forced to change their diet and turn increasingly to domestic animals around forests like cattle, sheep, dogs and even poultry to satisfy their hunger. This is why the chances of their coming into contact with humans have increased and the resultant conflict between them and humans. In view of the above it is not entirely surprising that incidents of leopard attacks have increased only recently. There have been occasions where leopards have had to beat a hasty retreat while trying to attack domestic animals in and around forests due to the alarm raised by humans. There have been instances where villagers have been injured trying to defend their livestock. But more importantly all these attacks have been instantaneous and so far in the district there have never been any pre-planned attacks by leopards on humans. Although, it is most unfortunate for both leopards and man that humans are being harmed, it is not correct for the people to put the entire blame on leopards for the attacks.

Now in the interest of both wildlife and humans, it is for the people and authorities of the district to reduce to pressure on forests and their wild residents. It would also be better for officials of the forest department to device concrete methods to capture stray leopards instead of trying every time to drive them away into the forests, which ultimately resulted in the leopard in Tumkur being very brutally killed. If measures are not taken to solve these problems, then the recent incidents might just be the taste of thing to come. As usual, sadly it will be the leopards, which might find it difficult to survive. And if this happens Tumkur will be a poorer place to live in.
Ameen Ahmed human leopard conflict karnataka wildlife leopard death Man animal conflict Tumkur Tumkur District Tumkur leopard Tumkur wildlife wildlife conflict wildlife death wildlife issues