Bird watching in lower Himalayas: 'Birding On Treks Around Nainital' 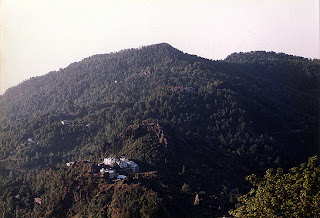 On 2nd June 1996, I was back at Ramnagar, the ‘Gateway’ of Corbet Tiger Reserve. This was after 4 months of my maiden birding visit to this beautiful part of India. I took a 60 km deviation to Nainital for a change. I had ascended this altitude earlier near my home in the splendid Western Ghats. The avifaunal diversity of both these places was the same in terms of sightings, but obviously different in terms of species. It is a formidable challenge for a birder from down South India to identify the birds on his first visit to these mighty mountains. But this is the challenge, which makes bird watching the ultimate of pleasures. 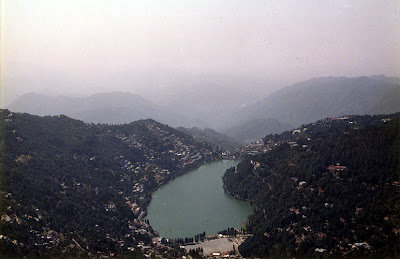 Arriving at Nainital, I occupied a small guest house in Sukha Tal, which literally means dried lake. Although the view was not the best, still it was surrounded by a few huge trees and offered fairly good birding. On the same evening the walk up to the Youth Hostel provided good sightings. I was able to photograph the beautiful red-billed blue magpie (Urocissa erythorhyncha) for the first time. Also I was able to listen to the melodious songs of the blue whistling thrust (Myiophonus caeruleus) along the way. The campus of the Youth Hostels Association of India (YHAI) which is surrounded by a number of trees is a good place for birding. Back again; sitting outside my room, I was going through the local map to learn the trekking route to the nearby Naina Peak, when suddenly I noticed a small bird creeping up the huge trees in front. It was the tree creeper (Certhia familiaris).

At 4.30 am the next morning, I set off for the 2610 m Naina Peak (earlier known as Cheena Peak), with my 3 friends. During the climb for the first few hundred feet, the vegetation was not dense. I could see a few yellow cheeked tits (Parus xanthogenys) and green-backed tits (Paurs monticolus) which gradually began to disappear from view as the bushes and small trees gave way to large Pine trees. Also the trek now was on the western slopes of the mountains lying to the west of Nainital town, which offered fine views of the vast stretches of Pine forests, unlike the eastern slopes from where only the Nainital township was visible.

It was getting cooler as we gained altitude. Here and there I came across the rufousbellied woodpecker (Hypopicus hyperythrus). The occasional song of the blue whistling thrushes and the drumming sounds of the woodpeckers echoed through the misty mountains and it was the finest music I had ever listened to. As I walked a few hundred steps ahead, I spotted a bird, which except for its white neck and breast looked exactly like a black bird. It was not afraid of me even when I went about 5 to 6 meters near it. I had no difficulty in identifying the bird as a male white collared black bird (Turdus albocinctus). As I was within a few meters from the Naina Peak, I came across a lone Himalayan pied woodpecker (Picoides himalayensis). The northern end of the Naina Peak, where a forest wireless station is situated offered splendid views of the mighty snow covered peaks of the faraway Himalayas. The cool, crisp and clean air, unending stretches of mist covered mountains, melodious songs of birds… It is one of these moments in a bird watcher’s life, which get embedded, in his very soul.


I took the other way back to Sukha Tal, the one via the Snow View point (2270m). The number of birds started decreasing as we descended the mountains. Also the number of tourists increased as time passed by. Birding in Himalayan hill stations has a special charm. You don’t need to trek too much through a jungle to see those beautiful gems. This was the main difference between the hill stations in the Himalayas and the hill stations in South India. 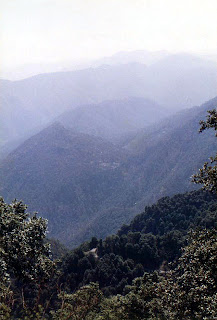 A couple of questions to a group of young children ‘trekking’ to their schools, led me to the doors of Mr. Anup Sah, a well known bird watcher and nature photographer of this region. Mr. Sah breathed new life into my knowledge of the Himalayan birds, as I learn to identify many of them sitting in his garden. I was silently sipping a cup of hot tea when I heard the loud double whistle of a bird, ‘pee-yeaoou’, which was haunting me ever since I stepped into Nainital. I was amazed when Mr. Sah, identified the bird as a great hill barbet (Megalaima virens). Amazed, because of the difference in its call and that of its cousin, the large green barbet (Megalaima zeylanica), that is the commonest of all barbets back home.

From the residence of Mr. Sah on the Ayarpatta hill, the walk to Land’s End is not too steep. The forest is dense, hence rich in avifauna. I came across that beautiful creature, verditer flycatcher (Muscicapa thalassina). Although during the past couple of winters I had seen this bluish-green bird, with its distinct black patch in front of the eye, in Devarayana Durga (DD) hills near my home, I was a little hesitant to confirm it as the same species, as it was calling so melodiously, while during the winters when I saw it in DD Hills, it was dumb. My local friend cum guide Mr. Yogesh Singh Bora explained to me that a walk on this road during dawn could reveal beautiful birds like the kalij pheasant (Lophura leucomelanos). Walking for a few more minutes and we were at Land’s end situated to the south-west of Nainital. The view from here was quite enchanting. One could see the plains below, a beautiful lake ‘Khrupatal’ and also sadly, vast stretches of deforested areas. A few Himalayan griffon vulture (Gyps hymalayensis) soared overhead for their daily ‘bread’.

From Land’s end the walk up to the 2292 m Tiffin top was quite tough but the sight of good forest cover, made up for the steep climb. I could see the whole of Nainital township and also the haze-covered distant Himalayan peaks. My friend took me through a less trudged path on the way down to Sukha Tal. The singing of a whistling thrush was broken a few times by the laughs of flocks of white throated laughing thrushes (Garrulax albogularis).

The next morning, I decided to trek again to Snow View. The path, which I took this time, was just below the rope way. On a couple of occasions I saw the slaty headed parakeets (Psittacula himalayan) flying swiftly accompanied by their sweet calls. When I reached Snow view, I cursed myself for not having trekked to some other place. I took the rope way down and reached Naini Lake. ‘It is biologically dead’, a college student passing by remarked, but I believed it was much more than that. Rotten, absolutely rotten! Years of neglect and domestic garbage dumping by the people, mainly the tourists, has wreaked havoc with this lake’s ecology.

That evening, my last in Nainital, took me to Hanumangarhi Temple, about half an hour’s walk from Sukha Tal. As is well known the sunset here is spectacular. Unending stretches of the Himalayan foothills changed their colour with every passing minute. I had seen more than 100 species of birds during the past 3 days, 14 of them for the first time.


As I turned back towards Sukha Tal, my last view was of a lonely Himalayan griffon vulture soaring overhead, and disappearing, like the orange sun behind the high Himalayan peaks.